Resettlement of the Bessarabian Germans

was born on August 17, 1882, in Seimeny, in Akkermann County, Bessarabia. His birthplace is 1,500 km from the imperial capital, Berlin. Despite this distance, the consequences of the National Socialist takeover of 1933 and its dictatorial tyranny will still affect him and his family in the distance. With the end of the Second World War Imanuel Böpple and his family reach Essenrode.

was born Else Dayss on May 7, 1923, in Parapara, in Ismail County, Bessarabia, to Wilhelm and Katharina, née Gebhardt. Else and her family, like the Böpples, suffer the fate of resettlement and later flight. For both families their escape ends in March 1945, in Essenrode.

Bessarabia is a historical country in south-eastern Europe, bordered by the Black Sea in the south and the rivers Pruth in the west and Dnister/Dnjestr in the east. The former Bessarabia today largely coincides with the part of Moldova which lies west of the Dniester, only the south (Bujak) and the far north (around Khotyn) belong to Ukraine. For centuries the country was a buffer area between the great powers of Austria, Russia and the Ottoman Empire. In 1812 the principality of Moldova ceded rule to Russia. Afterwards the area, which was mainly inhabited by Romanians, was part of the Russian Empire as the governorate of Bessarabia until 1917. In 1918 Bessarabia was independent for a short time. In the interwar period it was an eastern province of Romania and after the Second World War it was annexed to the Soviet Union. Source: https://de.wikipedia.org/wiki/Bessarabien; retrieved 24.02.2020

When did the Böpples come to Bessarabia?

German emigrants, who were called upon to colonize the country by the Tsar in 1813, lived in Bessarabia between 1814 and 1940, working as independent farmers on their own land. In 125 years of settlement they had expanded the original number of twenty-four mother colonies to over 150 Bessarabian-German settlements. The some 9,000 immigrants had increased more than tenfold to 93,000. The privileges initially granted, including self-administration by the welfare committee based in Odessa, were withdrawn around 1870 when the colonist status was abolished. Mainly due to the introduction of military service, many colonists subsequently emigrated to North and South America (particularly North and South Dakota in the USA, Canada, Argentina and Brazil).

Gottlieb Böpple was born on January 10,1805, in Kornwestheim in Württemberg. He follows the call of the Russian Tsar and emigrates to Bessarabia, where he marries the colonist Salome Hettig (*1810 in Augustowo in Poland) in 1830.

Imanuel Böpple’s first marriage was to Maria Bachmüller, who died in February 1914. Herta and Olga were children of this marriage. They both will later emigrate to the USA with their own families.

Unlike many colonists, Imanuel Böpple does not work as a farmer on his own land, but as a master tailor in his own firm in Mannsburg.

Hitler-Stalin Pact and the Resettlement

When Bessarabia was occupied by the Soviet Union in June 1940 as a result of the Hitler-Stalin Pact, almost all the “ethnic Germans” living there were resettled in the German Reich. In September 1940 a special resettlement contract is signed with the Soviet Union. The organizer of this campaign under the motto “Home to the Reich” is the Central Office Volksdeutsche Mittelstelle (VoMi). After a stay in camps lasting up to two years, from 1941/42 onwards the resettlers are given farms in occupied Poland, whose Polish owners are driven out by the German military. When the Red Army advances in 1944, the Bessarabian Germans flee to the west. Among the Bessarabian-German resettlers were also the parents of the later German President Horst Köhler. Source: https://de.wikipedia.org/wiki/Bessarabien, retrieved 24.02.2020.

The decisive passage in the call of the German Plenipotentiary for Resettlement: 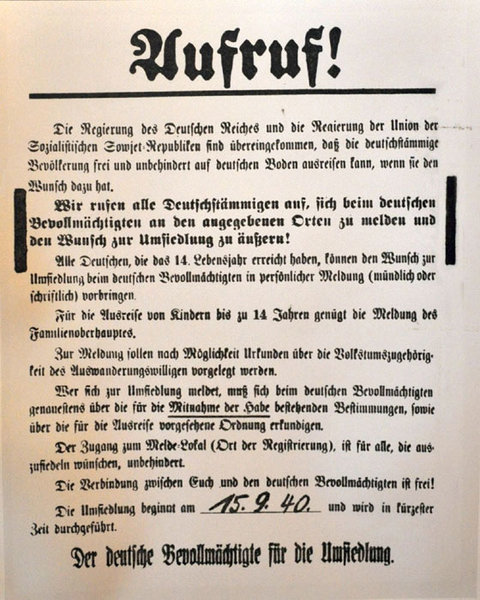 Organized by the Resettlement Commission, which arrived from the Reich, the Bessarabian Germans leave their homeland within a month in trucks, by train or in horse-drawn wagons on predetermined routes through the border towns of Galatz, Reni and Kilia.

Imanuel Böpple is resettled with his family in Posen in the Wartheland. He had founded his own tailor’s shop in Bessarabia in 1902, but later becomes a farmer. In the community of Preisingen, in the district of Gniezno, the family receives a farm with fourteen hectares of arable land.

In spring 1945, when the Red Army offensive pushes the German troops back ever farther to the west, Imanuel Böpple and his family flee to the west. With horse and cart and the most necessary belongings they set out on their way. Finally they find refuge in Essenrode. Once again the family builds a new way of life.

Imanuel and Wilhelmine’s children marry. Their daughter Erna marries Oskar Dayss, whose families also come from Bessarabia via the Wartheland to Essenrode. Erna and Oskar have four children, Monika, Norbert, Brigitte and Berndt. Two of the children now live with their families in Essenrode.

was born on May 7, 1923, in Parapara, Ismail County, Bessarabia. Else and her family also suffer the fate of resettlement and later flight. Else’s parents are Wilhlem and Katharina, née Gebhardt.

In contrast to the Böpple family, Else Dayss is not spared a stay in a camp. Only after almost a year is she allowed to leave the camp.

Even after March 1941, Nazi policy continued to focus increasingly on the settlement of the German population in the Wartheland. To this end, a large number of ethnic Germans from conquered areas of the Soviet Union were settled. From 1941 onwards, the Bessarabian Germans, the Bukovina Germans and the Dobrudschade Germans were mostly resettled in the Wartheland. This resettlement was often chaotic and disorganized. Previously the resettled people had been accommodated for months or years in hundreds of camps of the Volksdeutsche Mittelstelle (VoMi). In the settlement area, the German occupying power took the Polish owners’ farms under threat of violence and transferred them to the German settlers. Source: https://de.wikipedia.org/wiki/Wartheland; retrieved 24.02.2020

Like the Böpple family, Else Dayss and her family flee from the approaching Red Army. In January 1945 the winter offensive forces them to flee; their flight ends in March 1945, also in Essenrode. Else’s father arrives in Essenrode only four months later. At first there is no free apartment. For half a year the family has to make do with a stable as accommodation. Only then they can move into a flat.

In one of the first wedding ceremonies after the end of the war, Else Dayss and Hans Göres, who also reached Essenrode as a refugee, exchange vows. The marriage produces four children: Edeltraud, Eveline, Siegmar and Silvia. They too lived with their families in Essenrode and some of them still do so today.