Flight from Walbeck in the GDR

Irma spends the first years of her life mainly with her grandparents in Weferlingen, who lovingly take care of her. While her mother goes out to work during the day, her grandmother works at night. Irma will not get to know her father.

When Irma starts school, she moves to Walbeck with her mother and stepfather. She experiences the end of the war while still at school. At first she is very happy when American soldiers arrive in Walbeck. The children are happy about the chocolate and chewing gum. But a few weeks later the Russians take over Walbeck. As a 13-year-old, she experiences how Walbeck is placed under Russian occupation. Only a stone’s throw away from her parents’ house, Germany is divided. The German-German border is created.

In 1948 the Meyer family have to vacate their house. Since Irma’s parents’ house is located directly on the border to the West, Russian officers confiscate the house. From the house they have a direct view of the border running along Klosterberg. Within four hours the family of five has to vacate its house and is assigned a two-room apartment.

The Russians stay in the house for one year. Four weeks before Irma’s confirmation in spring 1949 the family is allowed to return to their house.

The inner-German border is at that time not yet fortified, so people still crossing the border from east to west and back again. Irma and her friends also cross the “green border” again and again.

When they cross the border on their way home one day after visiting the Brunnen theatre in Helmstedt, located in the western part of Germany, Irma and her friends are taken into custody by Russian soldiers. However, they are released after a few hours through the intervention of her stepfather. 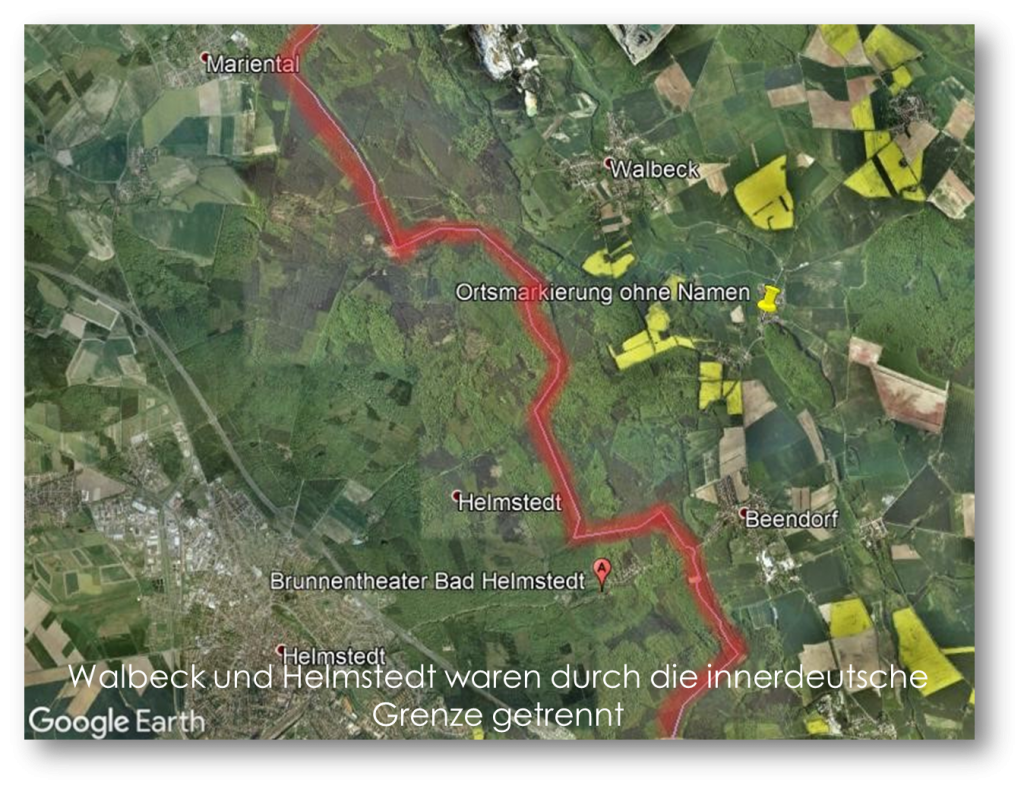 On July 28, 1949, Irma Meyer leaves the school in Walbeck. While English is taught as a foreign language in schools in the West, Russian is taught in the East. And so Irma finishes school with grade 2 in Russian.

A few months after the founding of the Federal Republic of Germany in the West, the German Democratic Republic, the GDR, was founded on October 7, 1949, on the territory of the Soviet occupation zone. The securing and guarding of the inner-German border in the east was handed over by the Russian troops to the border troops of the GDR. The border was now gradually becoming more heavily guarded.

For the almost 17-year-old Irma, life is becoming increasingly unbearable. The strained relationship with her stepfather, but above all the increasing lack of freedom in the developing socialist GDR, makes Irma decide to move on. When she hears in town that the border is to be “closed”, she and two boys from Walbeck resolve to flee to the West. On May 13, 1952, the three of them set off with a handcart in the direction of the border. They are accompanied by Maria, the sister of one of the boys. She herself does not want to flee, but only wants to help the others. The handcart is taken along as camouflage – they want to collect wood in the forest. In it, a pair of spare shoes for each of them is hidden, which they will put on after crossing the Riede, a small stream. When the small group meets soldiers patrolling the border, they are stopped. Since the young people know the border guards, they explain that they want to collect wood. They are allowed to move on. Maria takes the three of them down the monastery hill to the small creek. There Irma and the two boys cross the stream, put on their dry shoes on the other side and make their way to the nearby Helmstedt railway station. Later Irma describes the moment in freedom like this:

In Helmstedt we had a feeling, that is indescribable. We were free.

While the two boys stay in Helmstedt, Irma buys a ticket and takes the train to Wenden near Braunschweig to visit an aunt. The flight is not entirely unprepared for the three youngsters. One of the two boys immediately takes a job as a baker in Helmstedt and Irma leaves for Essenrode the very next day. There she is expected by another aunt, who has found her a job with the Gaus family in the household. Later she gets a job with farmer Weber of the same household.

What the three young people had heard some time before – the border is being closed – is now coming true. As more and more people use the permeable border to flee to the West, barbed wire fences are erected and dogs guard it. A few years later, the border will become an almost impassable bulwark.

No one has any intention of building a wall”GDR Head of State Council Walter Ulbricht on June 15, 1961

The building of the wall and the fortification of the inner-German border began with a lie. The journalist Annemarie Doherr of the Frankfurter Rundschau put a supplementary question to GDR head of state Walter Ulbricht at a press conference on June 15, 1961. Ulbricht assured that no wall would be built. Two months later the Berlin Wall was built. For almost 30 years it was to divide Germany.

However, the construction of the Wall had the most painful consequences for the people in East Berlin and the GDR. For they no longer had a “loophole” to the West. And anyone who tried to flee over the Wall or the inner-German border could expect to be shot. The fact that the “order to shoot” actually existed has been documented in writing for several years. Many people lost their lives to flee. Source: www.bundesregierung.de/breg-de/themen/deutsche-einheit/-niemand-hat-die-absicht-eine-mauer-zu-errichten–393932, retrieved 19.02.2020

Even before the Wall is built and the border fortifications are erected, people die trying to cross the border. Among the many people who lose their lives at the border is Irma’s father. Two days before his fortieth birthday, on January 28, 1949, Otto Karl Meyer dies at the border. In his death certificate the following is registered as a death sentence: “Death by shooting”.

Otto Meyer had becomes a casualty when he helps people fleeing from Weferlingen to Grasleben to cross the border to the West. On January 28, 1949, at 8:30 p.m. Otto is shot by a Russian soldier in a meadow near Weferlingen on the border. Irma only learns of her father’s death many years later. Otto Meyer is buried in Weferlingen.

A year after Irma’s flight, her younger brother, Heinz, also decides to flee and reaches Essenrode. Mother, stepfather and the youngest stepbrother, Klaus, stay in Walbeck.

When Irma arrives in Essenrode in May 1952, she feels well received and immediately makes friends. The relatives in Essenrode, the new friends and the young company with the “flag hunting” play a big part in Irma quickly feeling at home in Essenrode.
Flag hunting is an event for the whole village, especially for the youth. It is a competition for young men. They ride horses and have to beat a stick into a hanging little iron ring. The one who does it best gets a wooden flag. This flag is carried in a procession through the village to the winner’s house and is attached to his house. At night the whole village celebrates this in a barn dance.

Irma especially misses her mother very much. In 1957 her mother visits Irma in Essenrode for her engagement to Paul Remus, her future husband. Shortly after the engagement Irma receives the news of her mother’s death. She dies at the age of 43 on September 21, 1957. Irma and her husband Paul receive permission to enter Walbeck for the funeral. Afterwards it becomes impossible for Irma to visit Walbeck. Due to its location right on the border, Walbeck is a restricted area and may only be entered by citizens of the GDR with a special permit.

In 1958 Irma marries Paul Remus, who had already arrived in Essenrode in March 1945 after a two-month flight from Pomerania. In November 1958 her daughter Bettina is born. Together with the parents-in-law they build a house. In November 1960 their son Roland is born and in February 1968 a second son,Torsten.

Only 33 years later, with the fall of the Wall, that Irma will visit Walbeck again. Since then, she always enjoyed visiting Walbeck and Weferlingen. And the fall of the Wall will be yet another surprise for Irma. Another daughter of her father, of whom she has not known anything until then, appears – Irma`s half-sister Erika.